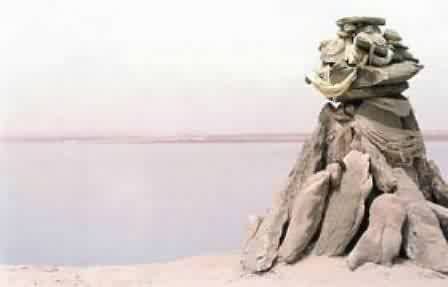 EDITOR: Qinghai pyramid-mound reminds me of Peruvian pyramids near the tomb of the Lord of Sipan 2 3 4 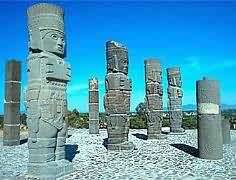 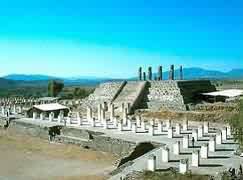 Alchemike:  In myths, whenever Inanna (Maya) interacted with this Pillar she put on the coat, the hat and the other garments she is wearing in this statue. The 'hat' is no ordinary helmet. It is called the Shugurra helmet.   According to Sumerian scholar Zecharia Sitchin, Shugurra translates as "that which makes go far into the universe."11
Alchemike:  What kind of a helmet is this?! Inanna also wears a heavy full-length coat and other garments. This robe is blue, the color of the sea. It is called the PALA garment or 'ruler's garment'.12 She has a cluster of blue stones gathered around her neck and throat area. Two straps run out of the TET, a box of rectangular shape on the back of her neck, and run across her chest.
Alchemike:  In Egypt, Maya and Yama were known as Isis and Osiris. They were the original divine couple who
planted and tended the Egyptian Garden of Creation at Abydos, Egypt. The golden Pillar of God was known as the TET or Djed Pillar of Osiris.  The TET buckle worn by Inanna linked her outfit with the TET Pillar. The box is joined to her helmet, the Shugurra, by another strap. This box is apparently quite heavy, as evidenced by the straps. A hose is connected to the base of the box by a circular clasp or buckle. Two identical 'stones' adorn her shoulders.
Alchemike:   According to Sitchin, no one has been able to explain the nature of Inanna's strange ensemble of coat, hat and other garments. Why is it worn in conjunction with the Pillar? Is it some form of ancient virtual      reality system that assists one in transforming themselves in order to go far into the universe? If so, what is this ensemble doing on the body of a 4,000 year old statue?
Alchemike:  ok...sorry...now back to the quasar...
BARDSQUILL:  Sitchin took his students into a museum in Philly, allegedly showed them a huge headdress, said it was Anunnaki queen

GODS OF THE GOLDEN TEARS "Some time after 4000 B.C. the great Anu, ruler of Nibiru, came to Earth on a state visit. 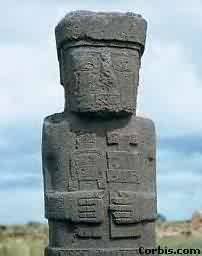 Was space travel actually astral travel?  Australian teleport breakthrough 2 It is a long way from Star Trek, but teleportation - the disembodiment of an object in one location and its reconstruction in another - has been successfully carried out in a physics lab in Australia.

BURIAL MOUND OF QUEEN OF SACAE FOUND IN UZBEKISTAN

Were the Saxons descended from the Scythia SACAE

When I read the attached article on your page I was reminded of what happenend to the site where Kennewick Man was discovered: the Army Corp of Engineers dumped several tons of rock on it. The bank on that section of the Columbia River needed shoring up was their excuse. Don't bother trying to find anything else at that site.

For any individual, group, or organization to control the past it must first manipulate it, hide it, or obliterate it. Too many land claims and titles to personal property (the foundations of the one world religion: capitalism) could be challenged if the complete and accurate past were known by the hoi polloi; too many challenges to scientific and religious dogma; too many reasons to expand consciousness and personal spirituality as opposed to group lock step. The sheeple feel much more secure when the power elites have the wool pulled down over their eyes.

A clay model of the head of Kennewick Man, based on a 9,200-year-old skull found in July 1996 in a park along the Columbia River in south-central Washington, is shown at Columbia Basin College, in Richland, Wash. The U.S. Department of the Interior will release results, Thursday, Jan. 13, 1999 of radiocarbon-dating on Kennewick Man, along with its decision on whether to classify the human remains as Native American under federal law. Whatever the government's conclusions, the results are likely to be disputed in this contentious case involving one of the oldest and most complete skeletons found in North America. 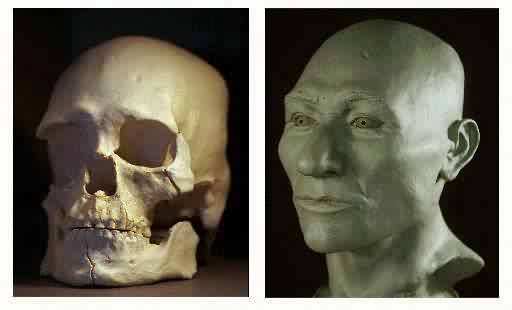 VOYAGERS THROUGH THE WORLDS?

DO WE SEE THE ANCIENT TECHNOLOGIES STILL AT PLAY?